It’s five after six and the evening prayer call has begun, made furry by a poor amplifier. I’m  sitting in my room, a bit glum, immobilized by dysentery.

I’m sorry to record the episode, but the colonial graveyards here are filled with victims of the flux, and it strikes me that little has changed in the past five centuries in terms of cleanliness. Hand washing remains uncommon, at least in the class of restaurants I use.

The windows are open, letting in the stench of burning garbage on the street down below. I’m writing by the light of a single fluorescent tube high on the wall. India has no reading lights. Thick tropic air, heat, dust and dysentery.

The perfunctory dictionary on my MacBook defines dystentery as “infection of the intestines resulting in severe diarrhea with the presence of blood and mucus in the feces.”

The description lacks force. For one, I seem to be issuing little feces; otherwise, I haven’t looked closely enough to see if there’s blood. In my case, the bowels curl a bit in warning and then murky liquid gushes out.

It began yesterday at noon, the day after Thanksgiving, and it tapped on the colon wall every half hour or so until I opened my medicine kit today and took two pink pills prescribed by the University of Michigan Travel Center, 500 mg. tabs of ezithromycin,  unlisted by the dictionary.

I had previously taken two Pepto-Bismol tabs, but they were routed by the infection. I didn’t sleep much, rising so often as I did, but I did have waking dreams, startlingly vivid, of Custer’s options diminishing by the moment as the Sioux closed in; the Peptos fell one by one and I staggered again to the toilet.

I think I know the culprit, a small beanery in Cherai town where I had masala dosa Thursday, my Thanksgiving feast.

Dosa is a crepe-like pancake, unsweetened, about 12 inches across, folded over with masala-spiced potatoes inside. It’s usually served with a little bowl of chili dip and another of coconut. Well done, it’s a good meal.

The counter-man reminded me of Floyd the Barber on the old Andy Griffith show. He had a sweet smile and was pleased when I had eaten, paid and walked out satisfied.

But I’m not sure where to place the blame. Maybe I just licked my finger at the wrong time. My bowels were quiet for hours after that meal, though I was more exhausted than I should have been after a six or seven hour trip – a walk up through Fort Kochi, across on the ferry to Vinin, and then a long trip up to Cherai, 24 kilometers north, on a local bus. That trip up and back was bouncy, and I did walk four or five miles along the beach and then the two kilometers back to the bus stop on a steamy day, and back on the ferry.

I was pleased with myself: the ferry cost 2 rupees and the bus 15 each way, and the only thing I bought, other than the dosa, was a coke, which I didn’t finish.

I got back here, though, barely able to sit up, and I went to bed and stayed there hallucinating the rest of Thursday, until Friday morning. Then I walked into town, got some rupees from an ATM, bought more contact lens solution, and had a quick breakfast at the cafe which offers free WiFi, where I researched where to go next, but couldn’t focus.

I walked back here and arrived just in time.

Twenty-four hours later, I was getting a bit worried. I was losing what seemed bucketfuls of liquid, and my only desire was to sleep, to lie down and close my eyes. I concluded, maybe speciously, that my symptoms matched the description on my pill jar, and I took the medicine. It didn’t work immediately. The Sioux, who had now turned into sharks, continued to thrash nearby, but I felt gradually an ominous tightening of my midriff, and the attacks diminished. I can still see the dorsal fins circling not far off, but I think the worst is over.

I keep thinking, though, that it may not have been Floyd’s masala dosa. It was a bit crude in execution, yes, but not the worst I’ve seen, and he and the waiter were so anxious to be helpful to a hungry stranger that I want to absolve them.

My mind turns instead to the odd-tasting scrambled eggs I had at the Fresh Choice cafe in town. I ate them, but only because I was hungry after a day of fasting. The war-whoops began an hour later.

However, that doesn’t explain my exhaustion Thursday and an achiness which extended left and right, up and down, as though I was foolishly attempting as I did in 7th grade to tackle Bud Parker head on.

I have been lucky. The room is pleasant. The toilet is near and attractive, and Louisa, the owner of Lotus Home Stay, has been very concerned. She offered to get me whatever I need. I pooh-poohed my needs and staggered out this morning for water and then for fruit and then, after the pills took hold, to the Idiom Book Shop, where I got 50% back of what I’d paid back for P.G. Wodehouse’s Laughing Gas (not his best) and 366 daily meditations from Hindu holy books and exchanged them for a Tom Clancy book full of Chinese gangsters, nasty corporate types and steely-eyed heroes. Its subtlety is what I need. 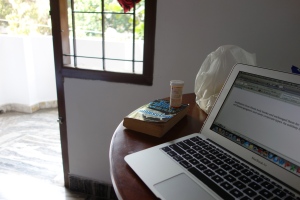 I’ll add a digression here to keep my ailment in perspective. At Bandipur in the nature preserve, I got up early to go on a “trek” with the resort’s guide. I was the only trekker, as the place was filled with rotund Indians in fancy cars.

Janine and I walked out of the resort into the brush, broken country of erosion ravines dotted with small villages, backed by a high ridge.

In the near village, Janine stopped outside a hut and called and in a minute a middle-aged man appeared, drawing his clothes around him. The left side of his face was grotesque, as if it had been caught in a grinding machine. His left eye was gone. The skull seemed nearly caved in.

“Bear,” Janine said. The man was attacked by a bear six years ago when he was cutting wood on the mountain, Janine pointed up at the near green slope. He shrugged. I took a picture, as was expected, and then reached in my pocket for a tip for the old man.

Janine stopped me. “No money,” he said, making a face. “He only drink and smoke.”

Years ago, I spent time on a Kuwaiti fishing boat manned mostly by Iranian workers. When they got hurt, as happens on fishing boats with lines running out and heavy nets swinging in, they were discarded, and they returned to their village minus an arm or with a leg that didn’t support them. No workman’s comp. The Republicans’ vision of the good society resting on rugged individualism and discardable people.

Drink and smoke… Why not? He doesn’t need to keep his head clear while he studies for the GRE.