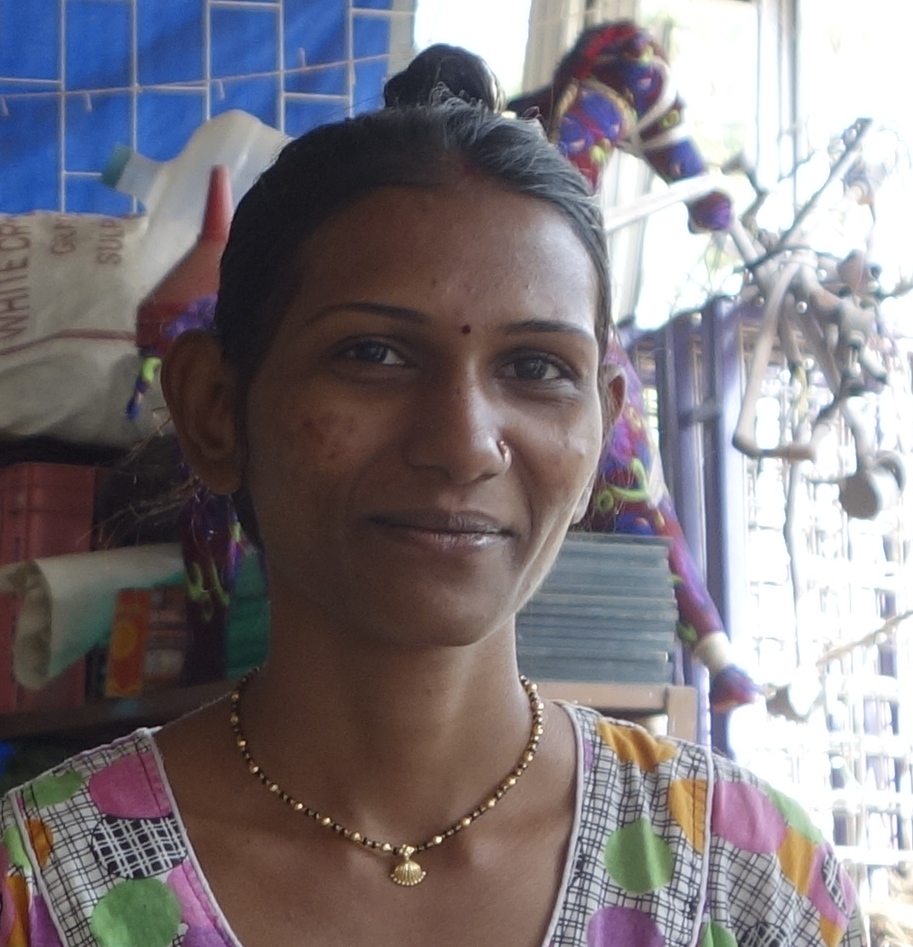 They have no email, but they were pleased pictures of them and the village would go today to the United States.

A Phaltan cart vendor of cooking oil said something similar the other day. I’d motioned with my camera, Could I take a shot? Sure, he said,  it’s as close as I’ll ever get to America.

The village, Thakuraki (pronounced Thak-rooki), lies just west of Phaltan, past the long-abandoned British airport. Chickens and goats are common, a few buffalo are staked out, but the men aren’t farmers. They work as day laborers when they can find work, carrying, lifting, making Rs 300 in a ten-hour day, about 40 cents an hour. 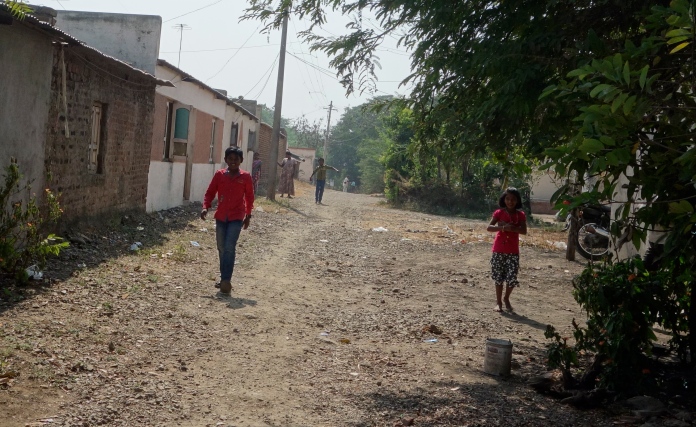 The houses are small, mostly brick with solid roofs and two or three rooms and here and there a portico. They were built illegally, on government land, according to my tuk-tuk driver Baba. Subsequently, the government provided electricity and water pipes. “Because of human need,” he said. Short of going to City Hall, I had no way of checking his story.

The Nikalje family, the mother and her married daughter, Sukanya (Sukan-eeya), insisted I come in for a cup of tea, then daubed my forehead with a red Hindu mark of welcome. They touched my feet in welcome and presented me with a coconut, a white Nehru cap (they had a tiny cloth stall on their porch) and a nice piece of cloth to drape over my shoulders as a shawl. The men were off working. 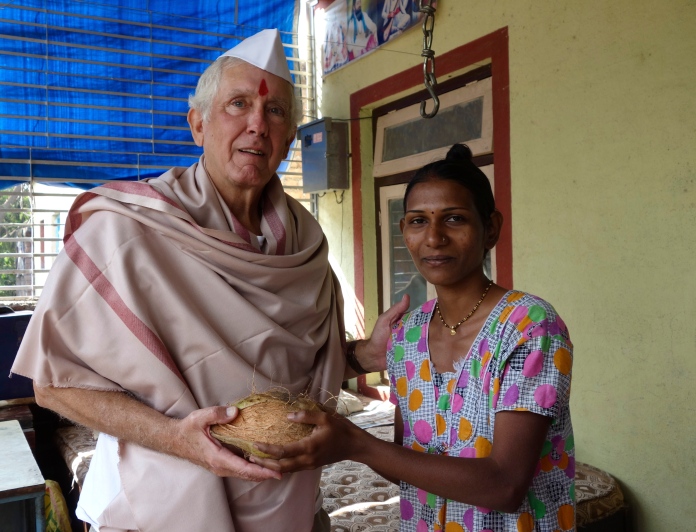 “You honor them with your visit,” Baba said.

I stopped because Sukanya of the pretty smile had pointed inside to her nephew, Amand, about 7, and said he was studying in “English medium.” I said hello to him, but he ran inside to hide, to shy to speak and then too stubborn to come out. While I took pictures of everyone in the family and of neighbors who came over to greet me, he hid in the back bedroom, poking his head around the corner but disappearing when I aimed the camera at him.

After half an hour, I was comfortable enough to follow him when he ran, to the delight of  the other little boys, and I got a few shots of him burrowed in a corner as Sukanya urged him to emerge by tugging on one leg. Finally, he came out, but he never found the courage to speak. 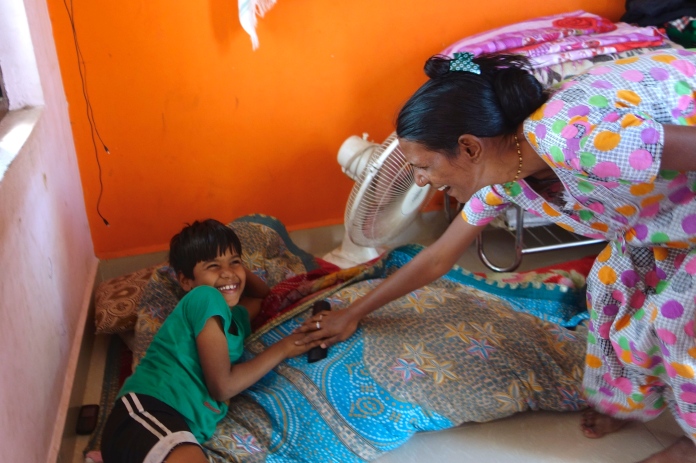 That was the job of Prasad Khude, about 11, a neighbor. He wore a purple T-shirt with the legend “cotton candy.” I was his first native speaker, but he was game and after an hour he was talking enthusiastically.

He is not a good student, he told me, and he doesn’t read much: “It makes me sleep.” He wants to visit America when he grows up.

When we left the Nikalje family, telling them abhari ahote, thank you, I grabbed Amand’s hand and said thank you again for the hat, the coconut, the shawl, the friendliness, and for Amand, and began to walk away. He came along for a few steps, comforted by the family’s laughter, and then his eyes got big. Take him, take him, Sukanya said.

I gave him a wave as Baba and I turned the corner. He smiled and raised a hand.

It was a beautiful day, Christmas Eve, with good-looking chickens running free (“one egg a day”). They retreat at night to a chicken house or are eaten by dogs or cats. During the day, the danger is from hawks.

On the far west side of the village, a shy woman accompanied by several teen-age girls appeared with a thin black kitten, stroking it affectionately. Its name was Money, meaning in Marathi not “money,” but “lucky.” “Black cat in home good luck,” Baba explained. 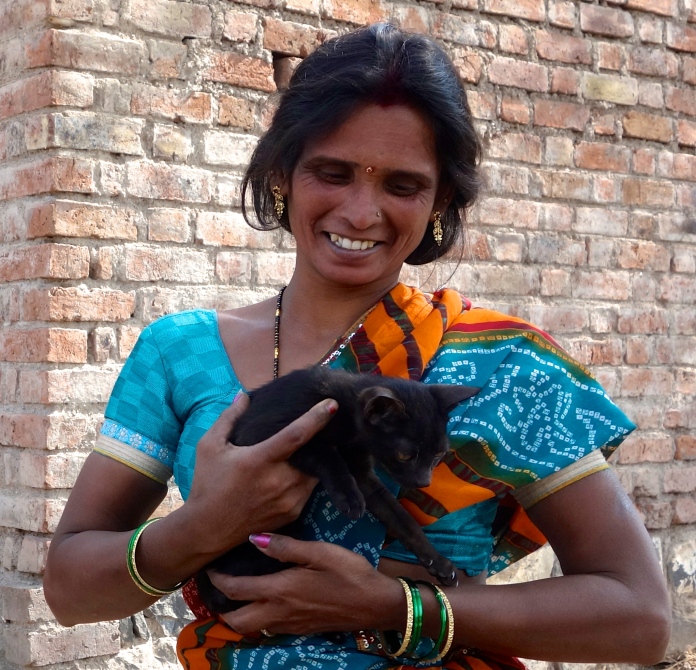 He is not comfortable with animals, and when a little boy brought out his two-month-old white puppy, jumping and biting as puppies do, Baba retreated, annoyed. I also admired a pretty green parrot in “the jail,” as Baba put it, a small cage brought outside for the morning sunshine.

Down a narrow lane on the north side, another family wanted to say hello, men, women and children, and I was drawn to a girl of about three, who puckered with anxiety as I patted her shoulder.

That happens from time to time. When it does, it eases the formality of welcome. I apparently make familiar soothing sounds. This little girl retreated to her mother’s hand and smiled from a distance; up close, I was too much. 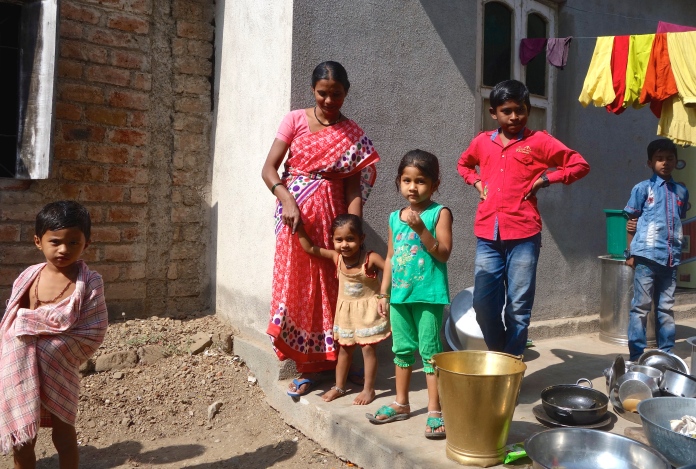 Wary of a stranger

I posed for phone pictures with several men and for Prasad, an emphatic stager. He presented me with a plastic baby in a yellow karate outfit, a key ring, in return for my autograph.

We left the village to friendly waves, smiles, as though I’d brought something of value.

I arrived without warning or reason and was welcomed as a visitor and a foreigner by villagers who didn’t think to question my humanity, a generosity now in retreat in my own fearful culture.

Such experiences, unexceptional here, raise the question of how valid our sense is of “backward” or “underdeveloped,” how descriptive of tone.

It was a good Christmas Eve.