The middle-aged man stopped his tiny white car beside me this morning as I was walking along the Buckle Canal just east of Jeyaraj Road in Tuticorin.

India had many beautiful places to see, he said. Why was I taking a picture of “ugly?”

“I ask friendly,” he said, grinning.

It was a reasonable question. I had already shot a pretty, distant steeple over a wall (only spotting the man peeing against the wall during editing) and a picturesque, high-wheeled cart. They, except for the pisser, was what he had in mind as suitable subjects. Would I run slideshows of sewage for the family when I got home? Pull up a shot of Buckle Canal and recall its flowerings on the first day of March?

He asked the question clearly and politely, but I’d been sick and was hacking and spitting like everyone else and wasn’t feeling diplomatic.

“Are you asking because you want to know, or do you just want to give me a lecture?” I said.

He laughed and waggled his head. “I am graduate,” he said, meaning he’d been to college and was a man of the world.

I squinted at him. What the hell did that have to do with the price of tea in China?

I didn’t say that; nor did I say that I was taking pictures of things I encountered on walks, in this case in a high-rent neighborhood, because men of the world like himself weren’t doing it.

He laughed. “You coming  German, USA?”

I commended him. He was the first Indian, I told him, to ask me such a question, and it was a good point. I had sent an e-mail with ugly pictures to the Chief Minister, but hadn’t heard back. If I had a prize, I’d give it to him for seeing ugly.

I walked on, getting a lovely shot of small feeder pipes dribbling eight or 10 more gallons a minute into the canal, which drops its load a mile on into Tuticorin Bay near New Beach. 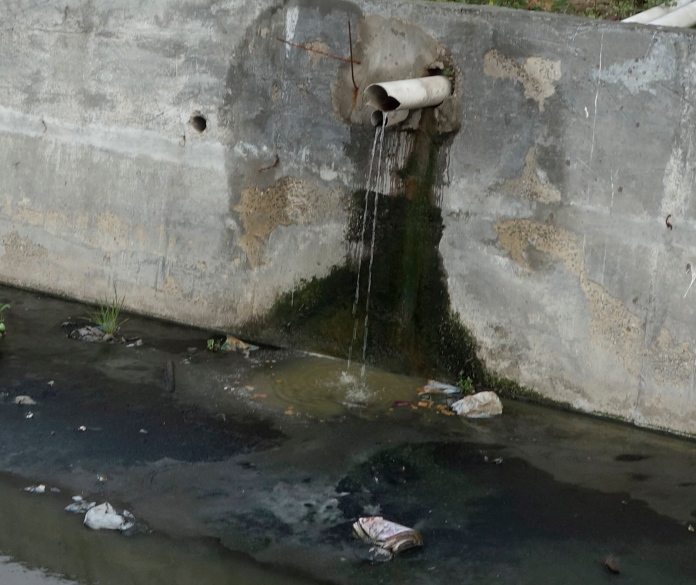 Yes, he surely had a point, and I’d heard it before. My old newspaper in the States took direction from the local Chamber of Commerce, Babbitts to a man or woman. They would use a cholera outbreak as an opportunity to highlight the excellence of local hospitals, or ear-drum-busting war planes as a chance to get funding for the Leahy School for the Deaf. I understood his reservations. Bad news isn’t constructive. Bad news is bad.

But I had walked by the shiny (on the outside) new municipal building here just before I got sick and was so struck by the contrast between it and the street outside that I consciously slowed to clear my throat on its manicured lawn.

I had become tired of namaskaring politicians featured always cutting a ribbon for a crony’s gold mine. Public health, sanitation, water purification, cholera rates, babies’ birth weights and so on are not mentioned publicly here, any more than our slums and poor get covered—i.e. a reporter embedded—by NBC or any of our lickspittle (what a good word!) networks, let alone God’s annointed Times, which waits these days for  confirmation from D.C. that what could be news is fit to print.

Beyond annoyance about how the average person here is mistreated by the government, I was still grinding my teeth over the moralistic support from all sides (Congress, BJP, AAP)  when the New York consular clerk Devyani Khobragade was charged in December with felonies for lying on visa forms about the pay for her live-in maid. Strip searching an innocent Indian diplomat! The Indian government promptly removed the concrete barriers protecting the U.S. Embassy in New Delhi. None of the papers here paid any attention to the maid, who was, after all, just an indentured servant. This was U.S throwing weight! The Fox-equivalent coverage here, which is all coverage, went on for weeks. Poor Devyani. Strip searched. Body cavities. Jailed with criminals!

I’m on the sixth floor of the “luxurious” Raj Hotel in Tuticorin. I just threw open the sash to get a breath of fresh air and promptly closed it. The Canal, 400 meters north, was blowing my way.

Nah. Thousands of people live beside Buckle and thousands more move along it every day on city streets. This is the home neighborhood for that pretty teenager passing on her bike, a handkerchief held to her nose, that little boy, the store clerk who went out her way to be nice and the beggar who touched me softly as I walked by. My questioner probably would consider him ugly. “We having many pretty girl. Super!  Why you photo ugly man?”

I respond that if a friend comes back from India with no photos of sewage and garbage, they haven’t strayed from Potemkin India. Chastise them. Take their progressive card.

The next time you see an Indian diplomat or high official blathering about Ghandi or making any claim at all to the moral high ground about anything, remember that they are doing nothing about Buckle and its millions of counterparts. Only a tiny number of people here, the Devyanis’ ilk, live outside the stench zone.