Kananagar, Kolhapur–Kolhapur, sometimes spelled Colapore, is an ancient city ruled until Independence as a princely state. It’s at the southwest edge of  Maharashtra less than a hundred kilometers from the coast, and this January, at least, the weather has been beautiful: sunny mid-80s during the day, low 60s at night.

Indian cities, sadly, are much alike: noisy and filthy, with few amenities such as sidewalks or–laughable–crosswalks for pedestrians.The main roads are clogged with unregulated traffic. The air is foul.

Pedestrians walk in the street in Indian cities

But enough of that. I prefer the slums. For one thing, they make me feel rich, a new and pleasant feeling. And no traffic. Life spills into the street. Women wash clothes by dipping them in soapy water and banging them on a flat stone. They get water from the common pump and hear what’s going on, and they stare in groups, not unkindly, as I walk by. They bathe their small children outside from a bucket; the old men sit, and the crones. Workers wash in their underwear  with dippers of water over the head, and children in uniforms make their way to and from school in the neighborhoods where school is affordable.

The little kids look at me with big eyes. Cows and goats, listless dogs, an occasional cat, chickens, all go as they wish. A cow pinned me softly with her huge head today against a dumpster.  I smacked her! Again! Holy Cow, hell! She turned away as indifferently as she’d come. 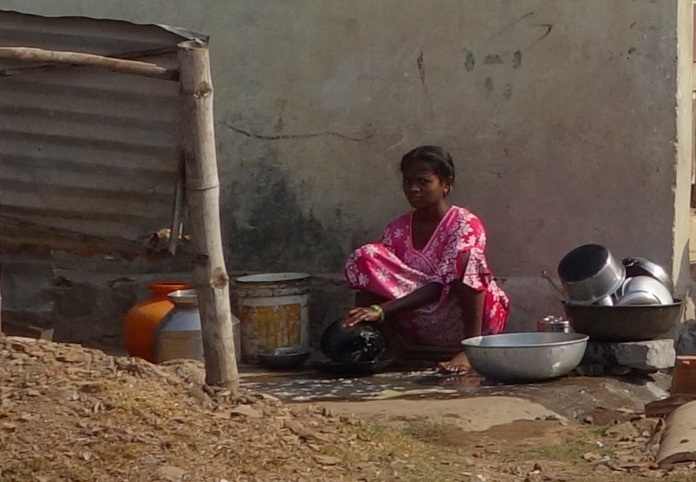 The age-old squat of the woman at work, Kananagar, Kolhapur

That was this morning. I’d walked back into Kananagar (“nagar” approximates what we would call a ward). It’s poor, ringed with sewage trenches, and the streets are dirt. I was there last week, just walking, taking pictures and talking as I could.

I met Agnes Francis that trip, and her neighbors. She invited me in for a cup of tea. Pictures of Christ looked down in Hindu array. The room otherwise was nearly bare. I took my sandals off at the door, as one does, and sat on one of two plastic chairs. Eight or 10 neighbors casually came in to get a look at a foreigner. Agnes Francis was quiet, and the others liked her. She touched them with kind pats. 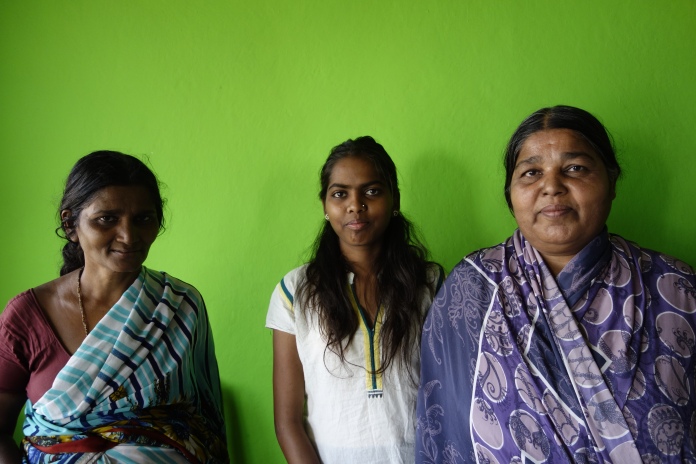 The neighbors were curious, but they didn’t gawk, nor did they ask questions. My story is that I’m a journalist traveling around India talking to people, writing about what I see and taking pictures. I use it though I’m writing only for myself. It gives me an excuse for wandering into neighborhoods where tourists never go.

I was drawn at first because Indian slums are spectacles, but they have become familiar. They are a refuge from the trafficky outside, and the people are far more pleasant than elsewhere.

I generalize, but here and in the States and Europe, though not in the Middle East, the poor are nicer than the rich. Here, they are a relief. India head-on is not otherwise a polite or hospitable country.

Today, mid-month, I met a gaggle of teenage boys, all with a hoodlum air–unwashed hair, dirty shirt, sunglasses dangling, a Brando sneer, gaudy watch band. They, too, have become familiar, so I said hello and spoke my little spiel, slowly. One of them told a little boy standing nearby in an orange hoody to go get someone, maybe the gang leader. 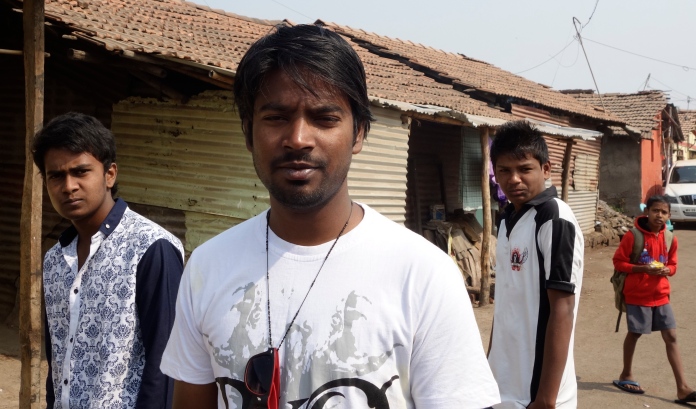 It was a small, reserved man who appeared. He eyed me, I thought, as though I were fair game. I looked for a wall to back against. He introduced himself: Pastor Suraj B. Kamble.

He took me to his small house, along with the squad of  hoods, all eyeing my American stuff.  I sat on the bed in the front room and soon a pretty teenage girl brought two cups of tea, one for him and one for me, and a plate of new biscuits from the corner grocery stall. He had a bit more English than the boys, but he had to reach into memory to find the words.

He was concerned I am not a Christian but openly shocked that I am an unbeliever. No proof exists of God, he said, but just as we can’t see the wind yet know it’s there, we must acknowledge God’s existence from the evidence of the natural world visible to us. And Christ taking human form to speak as he did was further evidence of divinity. 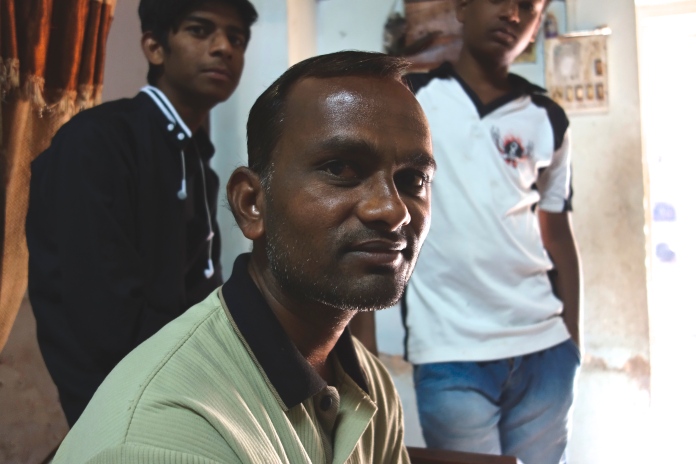 But he didn’t proselytize vigorously. He wanted me just to enjoy my tea and cookies. The boys, it emerged, were his–he smiled–disciples. They had become Christians in the last year and stopped fighting each other and making trouble.

The nagar was mixed: Hindus, Muslims, Christians, and one atheist. Everyone got along, he said. No problems.  It was a neighborhood of workers, manual laborers, which is what Agnes Francis told me last week. Day laborers earning $2.50 a day when they can find work. Carrying. Digging. It was difficult at times to make ends meet, Agnes Francis said.

The Indian Express this morning had an article about retirement income. They discovered that Indians currently need about 35,000 rupees a month ($530) for a secure retirement. The workers in Kanan earn about 7,000 rupees a month when they have work, but that’s hit or miss. The money must support the old, too, and the young, and workers wear out early here.

In India, different worlds live next door. Just down the dirt road from Kananagar is GreenField complex–high new apartments behind a guarded gate. The girls walking there all have shoes.

I took some pictures. They took some pictures, and then Pastor and the boys walked me to their church on the southern edge of the cluster of houses, fronted by an open sewage ditch. It was a small, bare and airless room at the end of a much-divided pole barn, rented from a Christian “aunty” we met as we walked to it. He has 40 to 50 parishioners and is raising money to cut a garage-door opening in the end wall for comfort.

I waved goodbye, they waved, and I headed on the lane west toward GreenField, jumping two sewage trenches on the way. 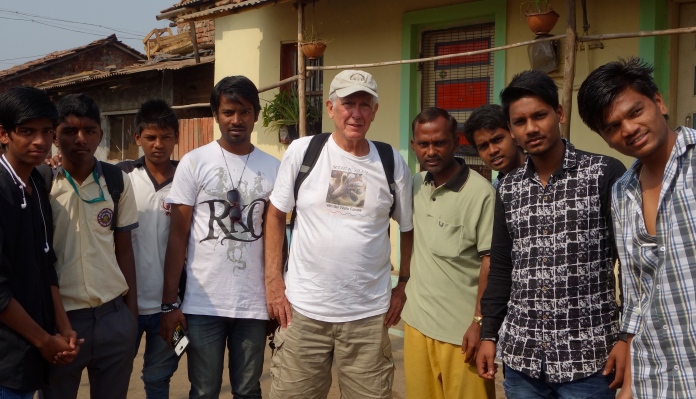 The hoods, Pastor Kamble and me, Kananagar, Kolhapur